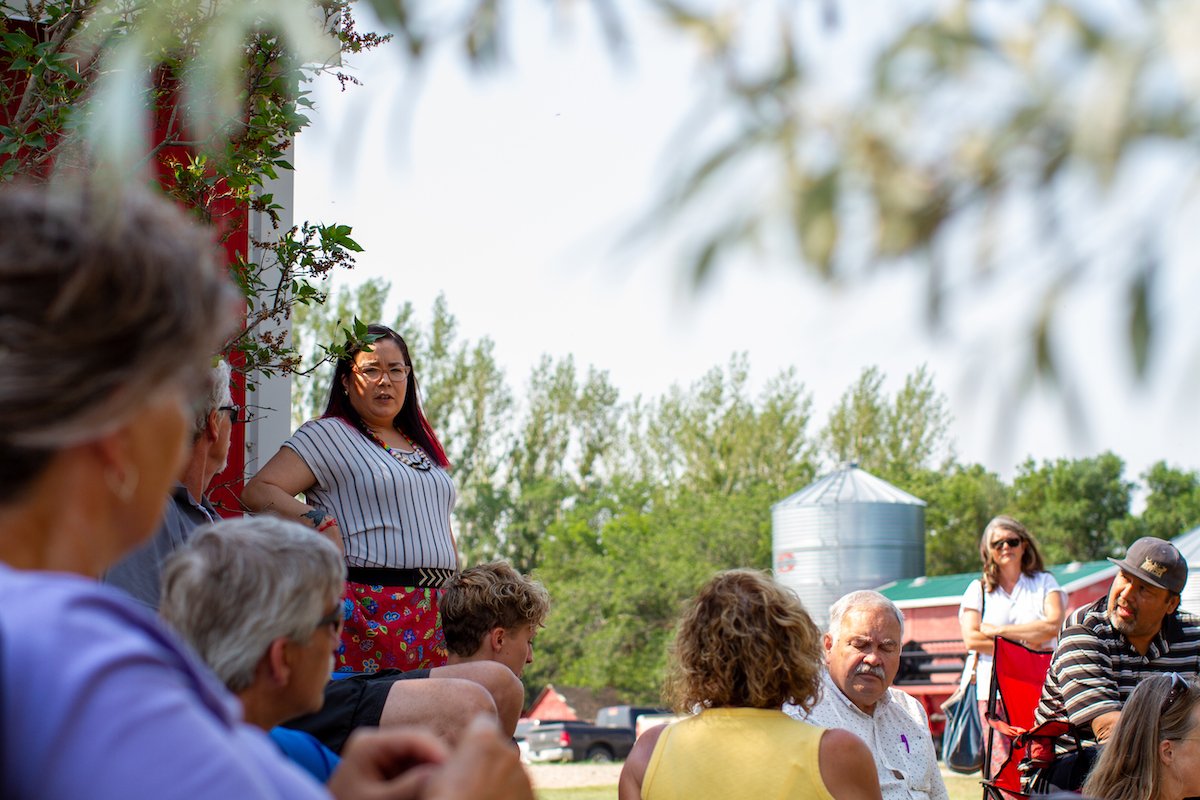 Amy Seesequasis says for Indigenous people, everything revolves around the land.

“When we look at our culture, it’s based on the land,” Seesequasis says in a virtual discussion on September 15, moderated by Canadian Cattlemen editor Lisa Guenther for a webinar with the Canadian Farm Writers’ Federation. “All our teachings, our language. And so, for Indigenous people, land is everything.”

In that regard, Seequasis says, ranchers and Indigenous peoples have the land in common — both depend on it for their livelihood.

“For Indigenous peoples, living off the land was always about survival, we needed to live,” she says. “And for settler families who came here to farm and to ranch, they too came here and they started that for survival.”

Seesequasis is a treaty relationship consultant and also works for Sask. Polytechnic. Previously, Seesequasis worked for the Office of the Treaty Commissioner. This job provided her with a variety of opportunities, including working with the Treaty Land Sharing Network.

The Treaty Land Sharing Network is a group of farmers, ranchers and other landholders who offer land access to Indigenous people to practice their treaty rights, ranging from hunting to gathering medicine. Landholders include their contact information and approximate land location through the network’s website, as well as relevant information about the land parcel such as plants or wildlife, or any restrictions on activity.

Tension between Indigenous and producer communities have grown in recent years with the killing of Colten Boushie, a young Indigenous man, by Biggar-area farmer Gerald Stanley, and left many Indigenous people feeling they can’t safely access privately owned land. The Treaty Land Sharing Network ensures Indigenous peoples can access the land safely and securely and tries to repair the relationship between producers and Indigenous peoples.

The network has been in the works since 2018 and officially launched in the summer of 2020. Seesequasis says the two founders of the network — Valerie Zink, a settler with a family history of farming, and Philip Brass, an Indigenous artist, hunter, and land-based educator — saw how conflict over the land affected relationships.

“A conversation began about, ‘How do we tackle this issue?’ about making sure that there is safe space for Indigenous treaty partners to access the land, and that settlers who hold title to land, what can they do to make those spaces safer,” Seesequasis says.

“The biggest thing was education. Providing awareness and opportunities for those partners to reconnect in spaces where historically they haven’t been able to, but they were meant to be in those spaces together.”

Tom Harrison is a rancher north of Regina, near Southey, Sask, and was also part of the Canadian Farm Writers’ Federation event. He had some conversations with his wife and daughter that inspired them to join the Treaty Land Sharing Network.

“My wife and I and our daughter, we were thinking about this long before we heard of the (Treaty Land Sharing Network),” Harrison says. “I remember having conversations with my wife about this. We thought, we’ve got to do something.”

“I haven’t been very inundated with a lot of (Indigenous) people on this,” Harrison says. “I don’t know…how many people actually have knowledge about this Treaty Land Sharing Network. I don’t know how well it’s been advertised. You’ve got people there, they might not have access to Wi-Fi…but they want to go out and shoot a deer. So how do you advertise this program to them and make it welcoming to them?”

Seesequasis also says another issue is the new trespassing legislation in Saskatchewan, which came into effect on January 1, 2022, and says that anyone who wants to access rural landowner’s property for anything deemed recreational must have electronic, written, or oral consent. This has been opposed by many with the Treaty Land Sharing Network, although the network does ask people to contact landholders before their initial visit to ensure everyone’s safety.

However, Harrison, who is also involved with the Saskatchewan Stock Growers’ Association, which pushed for the new legislation, says the association was mainly concerned with recreational users trespassing, not Indigenous people practicing treaty rights. Harrison adds, however, that he can’t speak for the intentions of other groups that were lobbying the government for the legislation.

Despite some differences of opinion over the trespassing legislation, Harrison says the Treaty Land Sharing Network is a start towards truth and reconciliation, but more can be done by producers.

“Truth and reconciliation are important,” he says. “But it’s got to be more than just being aware of it. You’ve got to do something about it.”

At the end of her discussion with the Canadian Farm Writers’ Federation, Seesequasis spoke about a moment with the Treaty Land Sharing Network, when they got together with a group of Indigenous peoples to hold a ceremony on a farm involved with the network. She says it was a powerful moment because it was the first time she’s seen a ceremony held off a First Nations community with so many settlers involved.

“Settlers have a story here, as well — that they came here for survival, and Indigenous people need access to the land. And together, despite what took place, we can work together at the grassroots level.”