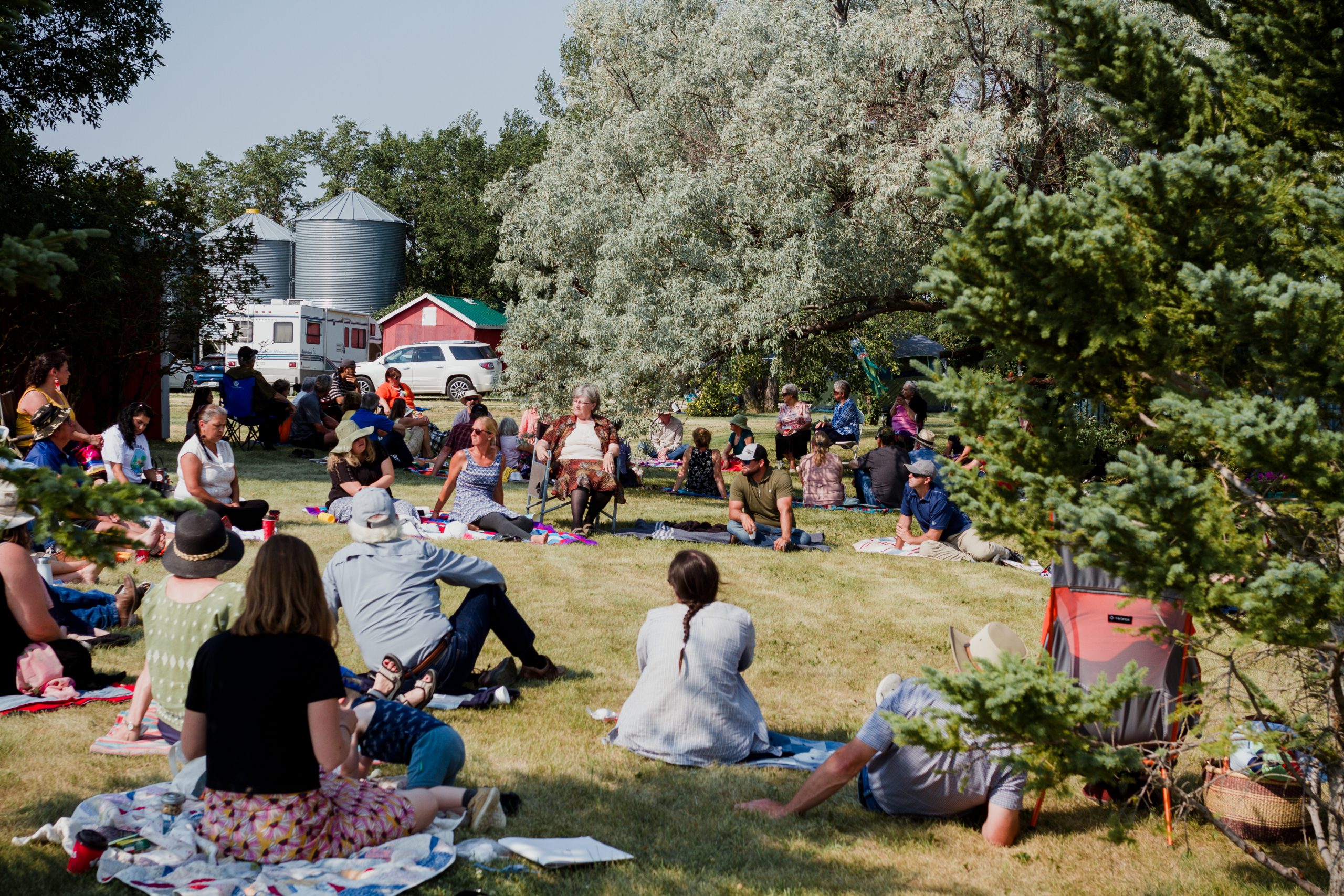 Land-sharing network called a sign for a hopeful future
September 30, 2021

Land-sharing network called a sign for a hopeful future

The Western Producer
By Roger Epp

The setting is a farmyard in central Saskatchewan, in a summer of record heat and drought. Judging from the line of vehicles parked along the road, it might have looked like a small auction.

At lunchtime, on a day when the temperature would rise into the mid-30s C, farmers and ranchers wearing the protection of long-sleeved shirts traded worries about a meagre cut of hay, dry as dust, and the hard decisions that will follow soon enough: whether to sell cattle or somehow find feed enough to keep them over winter. Farm talk.

Earlier in the morning, though, they had listened and accepted the authority of the Cree elder who talked protocol while his assistant prepared the pipe to pass around an imperfect circle. This was a day of honest commitment. That was what the pipe is for, the elder said, on this farm where Treaty Four and Treaty Six territory meet.

After lining up for bannock, women and men, Indigenous and settler, spoke in their turn in two large circles. They spoke of many things, but mostly of treaty, land and sharing, of hunting for food, of plants for medicine and ceremony. The province’s Treaty Commissioner, Mary Culbertson, drew a direct line between this gathering and the 2016 shooting death of the young Cree man, Colten Boushie, on another Saskatchewan farm.

An Indigenous man who raised four children on wild game said it had become more dangerous and difficult to do so. A rancher recalled teepee rings and stories of a wintering camp that challenge the lie that the land was a blank slate given to his ancestors. He knew otherwise.

Those who came from every direction returned home with signs to post on their fence lines, big enough to read from the road: Treaty Land Sharing Network. Indigenous Land Users Welcome. Some of them wondered aloud how their neighbours would react not just to the signs, going public in this way and making their practices visible, but to those made welcome by them. Later, one said he was ready with an answer: “There is no danger in sharing land; that’s what treaty people do.”

This description, I know, will draw at least three reactions. The first is deep, immediate anxiety — the kind that farm people get whenever land, treaties and Indigenous peoples appear in the same sentence. This is easily the toughest rural subject to raise in a room or in a column.

The second is skepticism ­— the kind that comes to Indigenous peoples from their own long experience of colonialism. They will wait to see that the network actually makes a difference in a province where anti-trespass laws and sale of crown land increasingly restrict access.

The third is disbelief — the kind that comes condescendingly from good progressive people in Canada’s large cities, who know that rural prairie places are hotbeds of racism and that rare exceptions only serve to prove the rule. They support the cause of reconciliation, no question, but too often that simply means having the right opinion at a safe distance.

On Sept. 30, Canadians will mark a new National Day for Truth and Reconciliation. We will do so in the aftermath of the fresh discoveries this spring of unmarked graves on the sites of former residential schools in British Columbia and Saskatchewan, and others sure to follow. People who hadn’t paid much attention to the work of the Truth and Reconciliation Commission, its final report, and its calls to action, issued in 2015, were sincerely troubled by what they learned.

The TRC was never only about a residential school system that, for several generations, took children from families and communities for purposes that it summarized as cultural genocide. It was not about closing a “sad chapter” in our history. It was not about compensation — a separate process altogether.

Under skillful leadership, it became a national forum that invited Canadians into the hard work of rethinking their own country, past and present, and taking meaningful steps toward what it called “a new way of living together.”

To that end, I continue to hold two positions. The first is that the work of finding that new way is too important to be left to a national government in Ottawa. It must be local and relational.

The second is that it is dangerous and wrong to assume that rural prairie communities are locked into relationships of antagonism, fear and indifference. If anything, rural places where settler and Indigenous people live in proximity ought to generate a much more productive, practical conversation about next steps than the national one.

In some cases, they already have. In choosing to live as neighbours, they enact the spirit of sharing and mutual aid that is the spirit of the treaties.

This is why the launch of the Treaty Land Sharing Network was such an important, hopeful event, even if it starts with a small group. For those of us who were on that Saskatchewan farm on that hot summer day, who shared in ceremony, it was about people who share the countryside, together setting a different course than the one scripted for them.